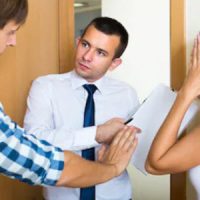 When it comes to ways to get people out of property or ways that people can be removed from property, we often think of two main methods. Foreclosure is where someone owns a home but doesn’t pay the mortgage, while eviction is when a tenant rents but doesn’t make the rent payment or otherwise violates the terms of the lease.

In addition to foreclosure and eviction, there is a third category to get people out of property they have no right to occupy. Ejectment is mostly used in situations where neither an eviction nor a foreclosure can be used.

Imagine this scenario: Boyfriend owns a house. He allows girlfriend to live there. The relationship goes sour, and now boyfriend wants girlfriend out of the home. How does he do it? He can’t evict the girlfriend as she has no lease, was never a tenant, and never paid rent, and foreclosure isn’t an option because there’s no loan or mortgage.

Issues in an Ejectment Case

As you can see, there are situations that fall between eviction and foreclosure, and that’s where an action for ejectment comes in. Ejectment deals with who has the right to title in the property. Whoever has a superior ownership interest wins an ejectment case. There is no contract, and no lease for a court to look at or interpret.

Differences Between Ejectments and Evictions

Ejectment can create difficulties that don’t exist with traditional evictions. For example, evictions allow a landlord to a summary procedure, designed to get rid of a  non-compliant tenant relatively quickly. But ejectment provides no such option; the action for ejectment is just a standard civil lawsuit, like any lawsuit, and with the (often extended) timeframes of traditional lawsuits.

Ejectment actions can take time because the person being ejected may claim that they have a right to be on the property by virtue of an oral or written promise. They may even claim to be a tenant. They do this so that they can take advantage of the many laws that protect tenants, laws that don’t otherwise apply in traditional ejectment actions.

Often the difference between ejectment and eviction can blur for this reason. A promise to allow someone to live somewhere may call for ejectment, but when the reason for living there is helping with bills or making other forms of payment, it may turn into a landlord-tenant relationship.

Do you have a real estate law case or problem, or are you having a problem with a tenant or a foreclosure? We can help. Contact the Tampa real estate lawyers at Gilbert Garcia Group, P.A. today.

By Gilbert Garcia Group, P.A. | Posted on December 14, 2022
« Using An Enhanced Life Estate Can Help You Avoid Probate (And Has Other Benefits)
Common Real Estate Contingencies »